In physical terms, one of the primary advantages of millivolt output sensors is size and packaging flexibility. Because there are no ICs and other large electronic chips to fit inside the sensor housing, millivolt sensors are more flexible in design to fit into embedded systems and customized equipment.

Click here to start searching for the pressure transducer that is ideal for your application.

This will complete the 4-wire circuit.

* In certain circumstances, there may be an additional pin or wire used as a case ground. This connection is not critical to the output signal but may be critical to maintain listed certifications of the transducer. Please refer to our wiring guides to verify wiring prior to installation. 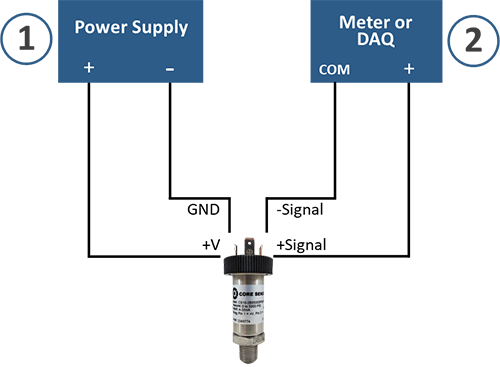 High Performance Liquid Chromatography (HPLC) – mV sensors are common in HPLC because often the system and pumps are calibrated as a whole and/or the system already has an on-board signal conditioner with trimming features to re-calibrate the equipment when needed. Also, mV sensors can be made as custom embedded units more easily, resulting in lower “dead volume”, which is important in HPLC applications to reduce cross-sample contamination.

Scales and weighing equipment/hydraulic press and forming – mV sensors are used in hydraulic weighing and machine press applications to replace load cells. The mV output of the sensors is similar to the mV output of many load cells, allowing OEMs to minimize system redesign when upgrading from a load cell to a pressure sensor.

Heating, Ventilation, Air Conditioning, and Refrigeration (HVAC/R) – There are numerous applications in HVAC/R systems where pressure is measured. Often, there is a need for two separate sensors to be used to measure pressure in two spots to provide operators with the differential pressure reading. These PLCs are designed to accept two mV signals and report the differential pressure. The CS10 industrial pressure transducer with a millivolt output signal would be an ideal solution to handle this type of application.

Connect With Our Sales Team

Have questions? Need a quote? We are ready to help! Fill out the form and a member of our sales team will contact you to discuss your requirements. You can also give us a call at (862) 245-2673.

– Need a quote?
– Have a technical question?
– Don’t see what you need?

Fill out the form and a member of our sales team will contact you to discuss your requirements. You can also give us a call at (862) 245-2673.